THE NATURAL STATE OF MEN AND WOMEN

God spoke to the woman (Eve) after the Fall (Genesis 3: 16) and He started with a discussion of her state during childbirth. There might have been some discomfort associated with the birth of a child in the original state into which the woman was created, but now that would be painful. Before the Fall the man was to have dominion over her and she would be comforted in that peaceful ,secure relationship. Now she would desire to usurp his leadership role.

Two Hebrew words are important for our understanding of the text: "Teshookataach" which means "to desire", and "Yemshall" which means "to rule". Both of these words appear in Genesis 3: 16 and again in Genesis 4: 7 and they have the same meaning in both verses. They indicate a desire to rule over something. In this case it is the woman who from the Fall onward has had a desire to rule over her husband. She will have a desire to control him and desire his headship. There is now a built-in conflict within the family. This came about in divine retribution because she chose to act independently from her husband and disobey God's Word. God says that He alone owns vengeance (Deuteronomy 32: 35a).

Her husband also would be a ruler over her. This does not mean a loving leadership that accompanies God's initial plan for marriage and the treatment toward her in general. His rule over her would be sinful and domineering. Later the man and the woman would have to master sin just like Cain (Genesis 4:7). Those who continued to turn away from God (like Adam and Eve did) would follow the sinful and natural inclination that God gave to the relationship. Man would dominate woman and she would resist and seek to usurp his rule. Before the Fall she was subordinate to him, but now in the fallen state God's plan for their hierarchy, their relationship would give way to competing dominance and resistance. God did provide for her though, but only to those who followed Him and kept His Word. God's plan is always best.

Because she led the first transgression (Genesis 3:6,13,16; II Corinthians 11:3; 1 Timothy 2:14) she would not have a leadership over men in the spiritual community in both Testaments. In the New Testament men are to love their wives as Christ loved the Church, He gave His life for it (Ephesians 5: 25). Additionally, she is to be subordinate to him in Christ (Ephesians 5: 22), which is a restoration of God's original plan for headship now found in the dispensation of the Church. It is only by God's grace and the Holy Spirit's leading the genuine believer that we can experience the marital relationship He intended. -- Dr. Daniel Woodhead (10/11)


Source: Woodhead, D.E. (2011) Commentary on Genesis.
Posted by Scofield Prophecy Studies at 8:00 AM

GOING THE WAY OF THE GENTILES

On Independence Day at the end of their prayers they were to only say "May the people of Israel remember!" whereas they used to say "May God remember!" (Yizkor Elohim). Secularism now rules the world. And Satan has won. --Dr. Mal Couch (10/11)
Posted by Scofield Prophecy Studies at 5:14 PM

THE SINS OF AMERICA

There are those who rise early in the morning and drink and "pursue strong drink, who stay up late in the evening that wine may inflame them! They party all night long, play music and do not pay attention to the deeds of the Lord, nor do they consider the work of His hands. My people go into exile for their lack of knowledge; and their honorable men are famished (morally and spiritually), their multitude are famished and they are parched with thirst (spiritually and morally). Therefore the grave is enlarged by its throat without measure."

Chapter 22 reads: "Instead there is gaiety and gladness, killing of cattle for banqueting, drinking of wine. And they say 'Let us eat and drink, for tomorrow we may die.' The Lord of hosts revealed Himself to me, 'Surely this iniquity shall not be forgiven them.'"

So much of this reminds us of America. Watch what you see on TV. The above passages sound just like us today. We are on the slippery slide. There is no return. America will not turn back! -- Dr. Mal Couch (10/11)
Posted by Scofield Prophecy Studies at 8:00 AM 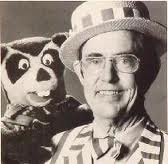 In the 1950s through the 1970s I was working full and part-time as a newsman with WFAA-TV, Channel 8, in Dallas. A close friend was a co-worker, Jerry Haynes, who thrilled all the little kids in Dallas as "Mr. Peppermint." Jerry was very talented. He was eleven years older than I and happened to also be attending SMU. When I first met him he was not a believer in Christ though he was attending a Methodist church.
I remember when he made a profession of faith in Christ. He was very driven spiritually, however, I don't know much of his spiritual life in later years. As a cameraman with the news department Jerry and I went on several assignments together and had a few spiritual discussions as we traveled.
I talked with Jerry a few years back. We discussed our early years pioneering TV in the Dallas area. Jerry died at the age of 84 from Parkinson's disease. Many times I would go into the studio at his set and take photos of his guests who came to our station to be on his programs.
Jerry will be missed by me and many others who appreciated his talents.
--Dr. Mal Couch (10/11)
Posted by Scofield Prophecy Studies at 7:00 AM